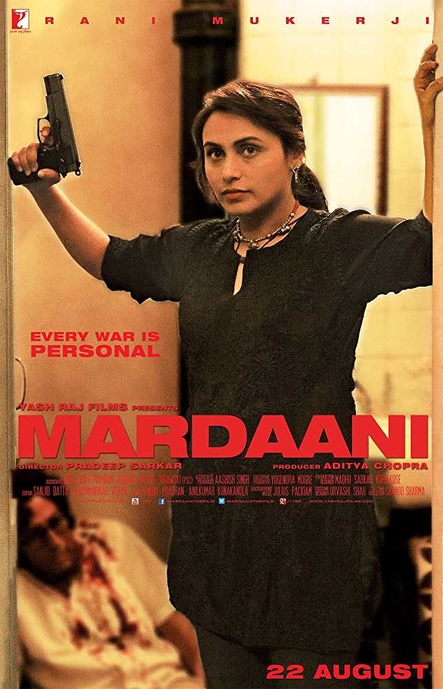 Mardaani – The title of the movie that promises ‘women empowerment’ as its main theme, is wrong on so many levels. It goes to prove that only ‘manly’ women can fight the evil. But still, I thought of something which can make us think a little differently, i.e. it can be dissected as ‘Mard-Daani’ on the lines of ‘Choohe-Dani’ (mouse-trap) or ‘Machchar-Dani’ (mosquito-trap), which would mean ‘someone who traps men’. This makes more sense, doesn’t it?

I was actually impressed by the makers for handling the subject pretty well without objectifying women much, except during the scenes where they had to, to showcase the grim reality of the society. Just when a line struck my ears like thundering, where a cop threatens a person to testify a crime by saying, ‘Agar is baar tune humara time pass karaya na, toh hijra bana ke dhande pe rakh dunga.’

‘If this time you waste our time, I’ll make you a eunuch and put you in “business.”‘

There you go! While you want to stand up for one section of the society, you happily degrade the other.

Then in another instance, they compare Shivani, the tough cop with John Abraham and Salman Khan and everyone laughs when they try comparing her to Sunny Leone because, maybe, she is too ‘feminine’ to fight the goons. Is that what you wanted to preach through this movie?

Another major issue with this film is that like cliche Bollywood Cop movies, Shivani takes law in her hands and even says, ‘agar legally kaam karte rahoge, toh criminals ko kaise pakdoge?’ (If you keep working legally, how will you catch the criminals?) Then she decides to give the tag of ‘public outrage’ on killing the antagonist.

Law? Legal Framework? Who Cares! I am THE HEROINE, I can do anything.

Lastly, there is this climax sequence where Shivani has everything in her favor but she desperately wanted to showcase her action skills so much so that without any logical reason she challenges the villain to fight her and try escaping her if he can. Predictably, (like the rest of the movie) she wins. And we are treated to a climax which is just there for the heck of it. The girls caught up in the racket are finally free, but then, WHAT? Free to go back to the roads or become victims to more such rackets?

Having said that, The movie successfully captures the horrifying world of Sex -trafficking. Rani Mukerji is perfect in her part and does complete justice to what is expected out of her. The surprise package was the well-educated, English-speaking Villain, Tahir Bhasin. He is totally opposite from our everyday ‘Dabangg’ and ‘Singham’ villains and still manages to leave his mark with his effortless acting. Mona Ambegaonkar was superb in the little role she had. A great task arranging the supporting cast for the movie. One major relief was that the makers didn’t add useless songs in the movie. (Which reminds me of ‘Gulaab Gang’ and how they ruined it completely by adding random songs and dancing sequences in serious situations.)

I won’t highly suggest that you watch this one, but then there is no harm in watching it once for Rani. She indeed has done a great job. 🙂